From November to December 2019, I participate at an exhibition named "small size exhibition" in the city of Marcq en Baroeul situated in the north of France.

From 13 to 14 october 2018, my studio has been opened to the public. This manifestation was organized by the council country of the north of France.

From 13 to 28 may 2017, I participated at an exhibit named "salon de l'atelier des amis des arts" in Marcq-en Baroeul city in the north of France.

Taking part to the biennial "ENNEVELIN'ART". On the 1 and 2 of april 2017. During this exhibition, I have painted a canvas with my palette knives in front of the public.

From 1 to 9 april 2017, some artists were mobilized for medical research, specially rare genetic disorders. I participated to this show room.

Participating to small size exhibit in november and december 2016 in the city of Marcq-en-Bareoul, north of France. 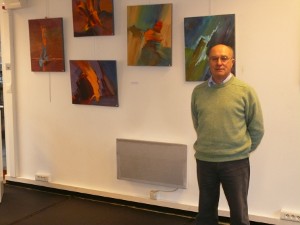