Born in 1946, Bernard in his early years began to practice photography. He was 16 when he joins a photographers group where he learned how to take photos as well from the technical point of view as from the artistic point of view.

Much later, when he was 40, to better express his creativeness he began to practice drawing and painting. After trying several techniques and mediums as watercolor, charcoal, acryl, he discovers a passion for oil palette knife painting.

Bernard is an artist member of atelier des amis des arts , Marcq-en-Baroeul in north of France since 1990. With this group of painters he will improve his practice of drawing and painting. He's been president of this group for two years and he is webmaster of its web internet site.

His fondness is heading for figurative subjects, but occasionnally he paints abstract subjects. He participates to several group exhibits and also to some personnal exhibitions.

His artwork primarily reflects gaiety, the joy of living and the nature's beauty. His painting knife practice gives to his artwork an invigorating and living aspect.

His main activity was business computer, his other passion he began since 1968 to until his retirement. 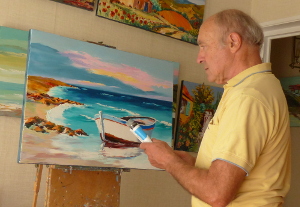 A partial view of my painting studio